skip to main | skip to sidebar

I always tell myself that 'next year' I'll have all my Holiday gift-making done way in advance (um, I think I said "October" last year... HA!). Of course it never happens and I find myself scrambling to figure out what to make. Grrr. 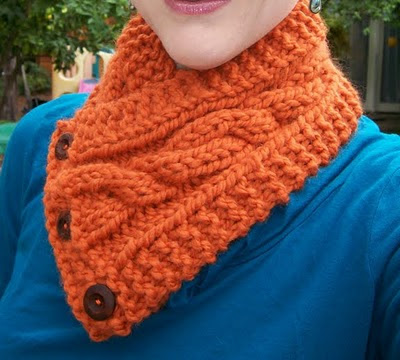 Thankfully, this year the stars were aligned and I found a fun yarn on sale (LionBrand's Wool-ease Thick and Quick) and a great pattern for a lovely cabled neck warmer by Robyn Grauer here on Ravelry. The warmers use only one skein, knit up in an evening and, are super soft and warm. It was such a satisfying knit that I made four! I played around with cable patterns and colorways on each. 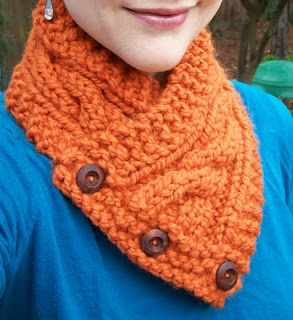 Wow, it looks complicated all typed out like that, but it really is very easy and once you get going it knits up super fast. Happy knitting! :-)

Although the leaves are long gone in some parts of the country, here in California (in my neighborhood at least) the change is reaching it's peak. This is my favorite time of year... and this is the gorgeous golden mess that our Ginko trees left on the sidewalk in front of our house this week: 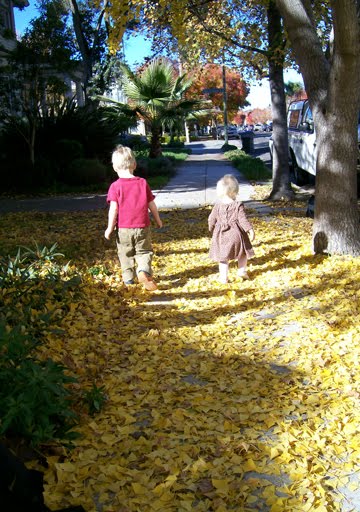 We also went gold inside as I gave the kids' art table a much needed refresh. Of course, in my excitement I neglected to take a "before" pic, but let me just tell you it was a mess. Left outside in the rain after a finger painting adventure. 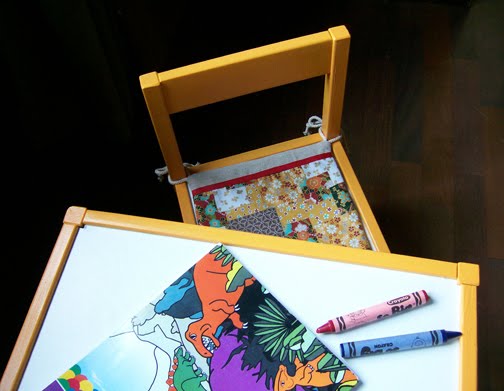 The color was supposed to be orange (by request) but ended up way more golden (school bus) yellow. The seat covers are an asian-inspired patchwork print that I had in my fabric stash. It was a lot more work than I anticipated but I love how it came out.

Hoping things are "golden" in your life + have a fabulous weekend!

A sweater for sweetpea 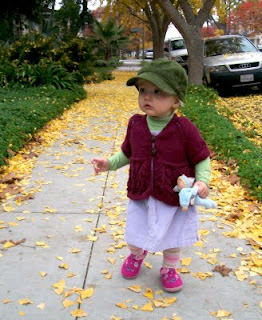 Just before Thanksgiving I finished this adorable sweater for my little sweetpea. The pattern is "Helena" from Knitty. I used Patons ultra soft Silk-Bamboo yarn. I think the colorway is "Plum". 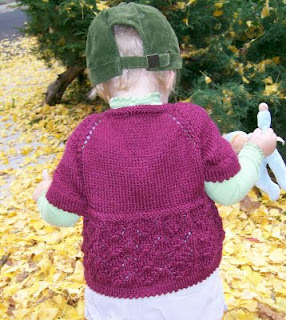 The sweater is a pretty quick knit. I modified the pattern to have only four repeats on the lace. I also wanted a short-sleeve, because a.) I thought it would look really cute and b.) I was afraid I might run out of yarn. I also added vintage brass buttons, instead of ties. 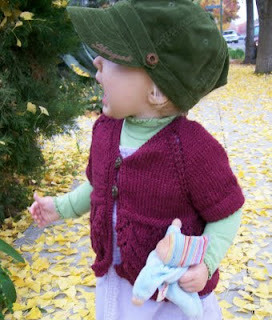 The only bummer is that, in my inexperience, I picked up too few stitches along the front and neck, so it has a bit of a pucker. Drat! I might try blocking to see if I can get it to lay flatter. Otherwise, I'm thrilled with how it turned out! 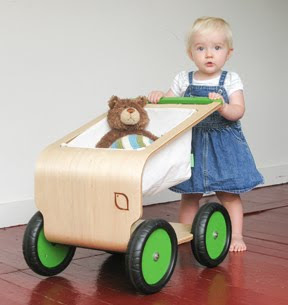 My husband has designed a super mod collection of bent plywood toys. Our new business is called Kaiku and our site is FINALLY up! I'm not exactly sure how we got to this point, but let's just say with two little ones at home and a full-time day job, it's been a looong year. 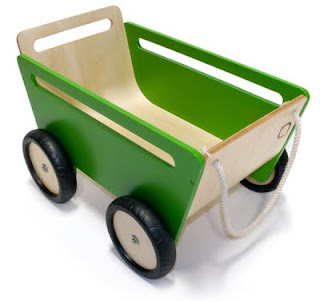 The toys are made of bent plywood and have natural finishes. The "Pushpull" (above) is my favorite. Seriously cute. 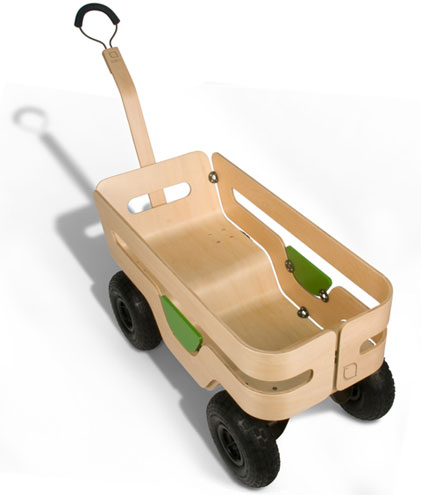 My husband has worked so hard on this. Check out our site when you get a chance....

AND as a thank you to my readers, use Kaiku coupon code: "friendsfamily" for free shipping on any order! (Currently we're only shipping in the U.S.)

Just enjoying some great Fall weather, hanging out with the kids and cruising around town on the Madsen!

In case you were wondering ... Yes, the enormous box they use to ship the Madsen bike makes an excellent playhouse!  :-)

So, we bought a Madsen kg271 Cargo Bike 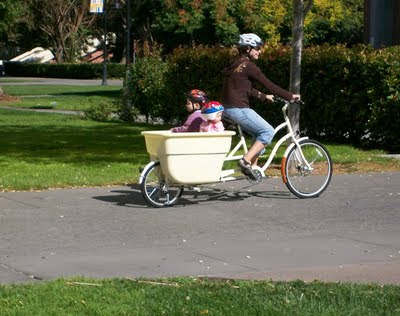 Yes, that's me on our new Madsen Kg271 cargo bike. (If you're not familiar, see the Madsen site here). The bike is awesome so far (3 days). We were all able to go out this morning for a test ride with DH behind taking pics and making sure everything was going a-ok with the littles in the bucket. 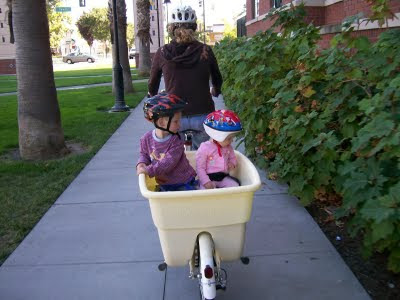 I am so excited about this because up until now I've been walking the kids everywhere in my BOB duallie. And when I say WALKING and EVERYWHERE I mean... to and from preschool 2x/day, to the grocery store (with "miss A" kicking a gallon of milk the whole way home because there's nowhere to put groceries on the BOB), to the library, park, etc. and a 5 mile roundtrip to the Children's Museum about every other week. (Yes, I agree, a five mile trip deserves a bike!)

Not that I don't love walking, mind you, it's just so fun to ride a bike. And now that I can take the tots along with me it, well, it's just that much more fun! (BTW - miss A is only 12 months and I'm relieved to say she did great seatbelted in the Madsen bucket just like big bro!)

And, of course, after owning the Madsen for only a day I just couldn't wait to sew up an accessory for it... so I made up this soft cover for the bucket... 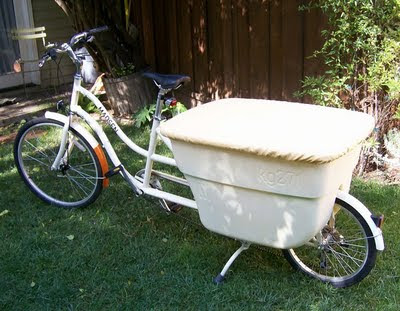 I first thought I'd make the cover out of a nice outdoor fabric, like Sunbrella. But then I found this buttery piece of heavyweight cotton twill in my fabric stash and I just couldn't resist. I love how it turned out! I'm sure it won't hold up as well as outdoor fabric, but now that I've made one, it'll be easy to whip up another should I fancy an upgrade down the line.

I'll be writing more about my experiences with the Madsen as time passes. In the meantime if you're interested in a couple of reviews by more experienced cyclists, there's a nice one here at A2W and another from Julian + family at Totcycle.

It's been awhile since I've updated the ol' blog here...Lots going on in the Herbst household (more to come!), so I haven't had much time for crafting... I have, however, recently become bike-obsessed.

I really, really wanted to upgrade my rusty town bike with a new ride. So after searching craigslist for weeks I finally found this super-sweet Gary Fisher Simple City 3. 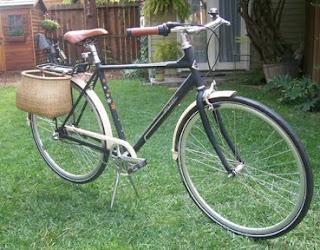 It's not the pretty, girly aqua women's bike that I first fell in love with, but hey, that's craigslist. I got a great deal, the bike is like new and it turns out that the men's larger frame fits me much better than the women's medium frame anyway. It is sooo fun to ride. Yea! 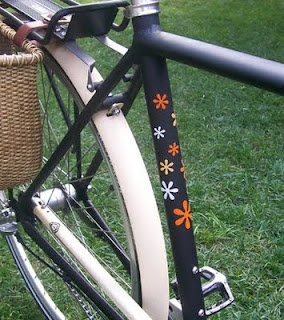 And I had a great time making the bike a little more girly by adding these awesome fun reflector stickers a brass bell and a side basket. Isn't it cute!? Now if I can only figure out how to get the kids on board... 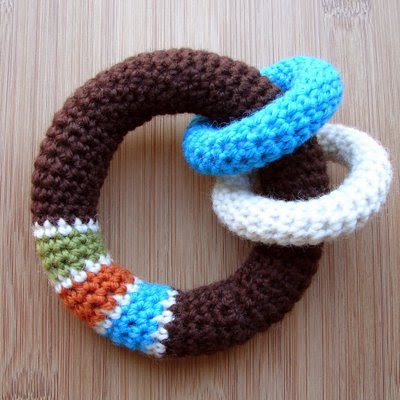 INSTRUCTIONS:
- Starting with the first small outer ring, chain 6.
- Slip stitch in the first chain you made to form a ring.
Stuff the tube lightly as you work
- Make 1 single crochet in each single crochet around until you have a little tube measuring 6 inches long. 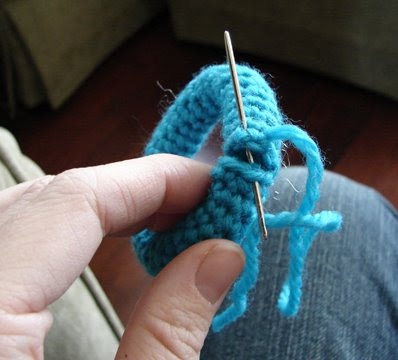 -Bring the two ends of your 6" tube together to form a ring, stitch closed.
Repeat above instructions to make a total of two small rings.

For the large inner ring:
- Chain 12 (or 14, depending on your tension)--you want it to be nice and tight
- Slip stitch in the first chain you made to form a ring.
Stuff the tube firmly as you work, adding in a small jingle bell or two
- Make 1 single crochet in each single crochet (changing colors as desired) until you have a tube measuring 10.5 inches long. 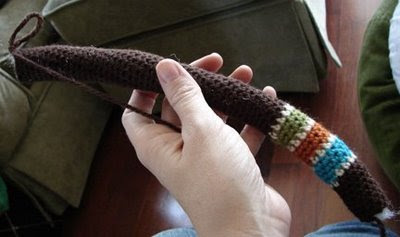 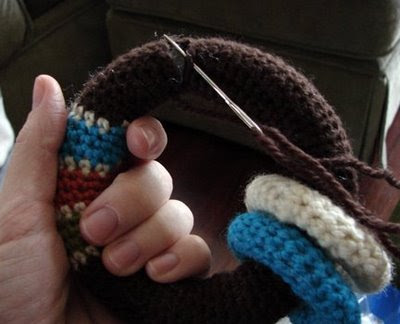 TA-DA! Easy-peasy. You just made a "Loop" baby toy!

Amy Herbst
I am mom to two little ones, and an avid crafter living in Northern California. 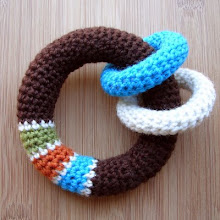 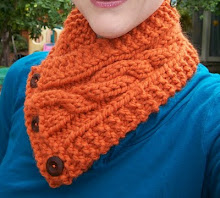